Create is a multi-purpose WordPress theme that gives you the power to create many different styles of websites.

THE REAL STORY ON "THE NAME"

What's in a name? Well, more than one meaning sometimes. As is in the case with Toast & Jam. Maybe the most frequently asked question: "Where did you come up with that name?", can be answered in a short little story - Mike & Mark were talking on the phone, trying to think of a fun, catchy name for this little duet idea. Mark was standing in the paint section of a hardware store, looking at the Martha Stewart collection of paints! After reading off a few names to get some inspiration, and rejecting ideas like A Hint Of Oatmeal and Jack Horner's Plum, he came across Bread & Butter. That seemed to hit a note with Mike, who thought the idea of tying two words together would best symbolize the duo. And "Bread & Butter" became "Toast & Jam", along with the concept of "toasting" between songs, and "jamming" out the tunes!

Please take your time and fully check out our new site. We have lots to explore with a great in depth look into both "Toast" and "Jam", who's who... and why. And a look at our gear, great photo galleries and much much more.

Drop us a line and say hello! We look forward to hearing from you and seeing you at our next show! 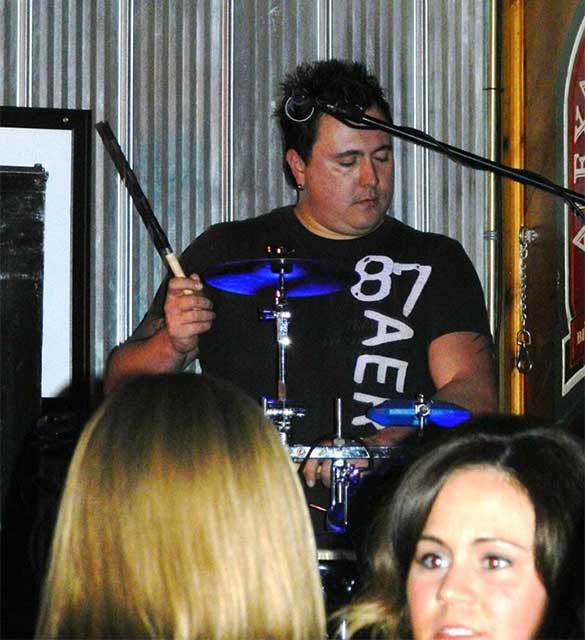 Moved to Canada when I was 2 years old (not on a boat) and became a Canadian Citizen when I was in grade 3. And in the words of Loverboy (Canadian), lovin every minute of it!!!! EH!!!!

Music is my salvation!

I've been playing drums since I was 15 years old (thanks mom, for allowing the racket), and did my first live gig in a band called Divided Loyalties @ The Aberdeen in Chatham when I was 18. Scary place, but it was a dream come true. It put my focus and drive into wanting to pursue music in my life a reality. Any musician will tell you that there is nothing like the feeling of being on stage.  It actually becomes an addiction.  You just can't get enough of it! In the words of Billy Joel, "Why waste your time in life doing something you don't love?".  And that's why I do what I do today! The feeling of giving an individual, or a couple, or a group of friends, an unwinding escape from the everyday through music, really is more of an honour to help contribute to that! So to anyone who has seen us play and has thanked us or commented on having a good time with us, I just want to say thank you back, for enjoying what makes my dream a reality!!!

Not sure why I got the nickname "Jam", but it is one thing that always makes me laugh when we are asked "Who's toast and who's jam"? Just seems like 98% of the people who ask put me in that spot, so that's really my claim to the name. It really sticks even after we reveal the actual secret behind the name Toast and Jam, but if you don't know what that is, then you will have to come check us out at a show near you! Find out why toast and jam is NOT just for breakfast anymore, LOL!

I guess it all began with the good fortune of having a musical family, including an older brother who played guitar. The "moment" came sometime around age 12, when I pulled his guitar out from under his bed, found a chord book in his case, and just started learning as much as I could! It kinda helped that I was inspired by the fact I had been playing ukelele in school, and being able to sing and play a song got the fire burning! So persistence, and the desire to perform, got me to where I am today.

The Road to Toast & Jam:

On the way to now, I've performed with some great musicians, and I've had all the fun that comes with that, including being a part of the fun of creating a band......and various band NAMES! Such as White Raven (don't laugh), First Offence, Summer Breeze, Everything's Jake, This End Up, and finally Toast & Jam.

When we came up with the name, we actually didn't intend that one of us would be "Toast" and the other "Jam".  We were thinking more like Y&T, or Love & Rockets, or Hootie & The Blowfish... NOT Hall & Oates!  But after a few weeks of playing gigs, and a thousand people asking "Which one's Toast and which one's Jam?", we decided we had to change up our idea.  So, on the way to a Windsor gig, we just sort of tossed a coin and Mike became Toast, and Mark became Jam!